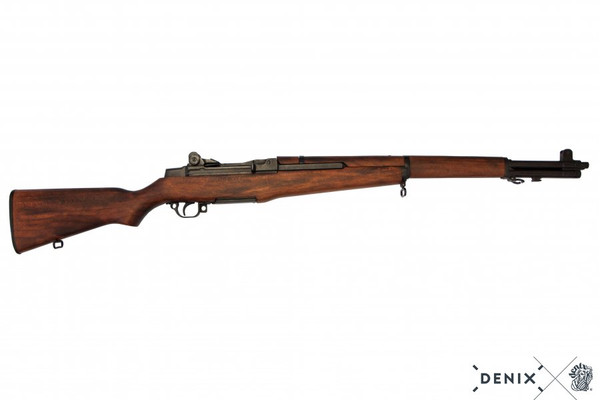 The M1 Garand, it was developed by gun designer John C. Garand in 1928. It was a semi-automatic rifle, gas operated and fed by a magazine in the block which carried 8 cartridges .30-06 Springfield; when the last bullet discharged, the empty magazine was automatically ejected, producing a characteristic sound, easy to identify. It had an effective range of 550 m, with high accuracy and hit availability. For these reasons, it got to be one of the most effective guns of World War II.

The M1 was the first semi-automatic rifle commonly used by the infantry of the United States, getting to produce more than 5,000,000 units. Its simple construction which made it possible to clean and maintain the weapon always at a point, its reliability and firepower against its German counterparts and the Japanese, who continued to use bolt-action rifles as the infantry weapon. standard, gave American soldiers a clear advantage in combat. General George Patton only referred to M1 Garand as "The best tool of war ever".

For several decades it was used by the United States Army. in a few conflicts: during World War II, the Korean War and, to a lesser extent, during the Vietnam War. Other countries have adopted its use: Germany, France, Japan, China, etc. It was also used by the guerrillas in South America and during the Cuban Revolution to demolish the dictator Batista.